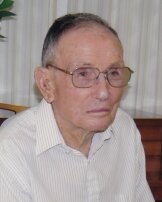 Paul was born on July 26, 1916, in Simsboro, Louisiana. Paul worked in the CCC for three years before entering the military. He was a WWII Veteran serving in the Army as the rank of Staff Sgt. Paul served in the Panama Canal zone during WWII. He married Kathrin Cantrell on September 10, 1948, in Crane, Texas at the Tabernacle Baptist Church.
Paul worked for Gulf Oil for 38 years, retiring in 1983. He was faithful member of the Tabernacle Baptist Church having been a member for 69 years, serving as a Deacon for 51 years. The Church dedicated and renamed the fellowship hall â€œDavidson Hallâ€ in his honor.
Paul loved to spend time in his garden, and even until the age of 95, he still faithfully took his morning walk around the neighborhood.

He is survived by his loving wife of 67 years, Kathrin Davidson of Crane; two daughters, Paula Cass and her husband Bill of Crane, and Helen Baxter and her husband Fred of Dubach, LA; one sister, Mary Frances Bledsoe of Shreveport, LA; 4 grandchildren; and 5 great-grandchildren.

The family will be receiving friends at the Shaffer-Nichols Funeral Home in Crane on Friday, December 18, 2015, from 6pm until 7pm.
Funeral Services will be held at 3pm on Saturday, December 19, 2015, at the Tabernacle Baptist Church. Burial will follow in the Crane County Cemetery.
To order memorial trees or send flowers to the family in memory of Willie Davidson, please visit our flower store.