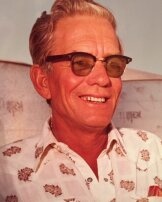 Willie Omer â€œBillâ€ Chambers, 84, of Fort Stockton, stepped into Heaven early Monday morning May 23, 2016 after a battle with cancer.
On August 26, 1931, Bill was born to Omer and Mamie Chambers in Burkburnett, Texas. He was raised in Burkburnett, and at the young age of 15, he entered the oilfield working as a floor hand. Over the span of 50 years, he worked every job there was to do on an oil rig even working his way up to become a company man. His specialty was poisonous gas wells. Bill worked for several companies including Laughlin Brothers, Sharp Drilling, Hughes, and Pioneer. At one point he was even a salesman for Chicago Pneumatic which had him traveling all over the United States and even as far as Alaska. When he was in his 70s, he was sought after to return to the company due to his experience â€“ he declined because he was thoroughly enjoying his retirement.
He married Darlene Keeler Conway in Fort Stockton on November 16, 1973. Darlene had 4 children of her own. Bill became an important part of all of their lives.
Bill was a tall, lanky man with the CB handle of â€œToo Tallâ€ because he was 6â€™6â€ and 220 lbs. He was a gentle giant that loved life and loved people. No matter where you went with him, he would know somebody there. Bill was an avid outdoorsman skilled in hunting, fishing, and camping. He and Darlene spent many days traveling with their camper and boat. Together they enjoyed ranching West of Fort Stockton, raising cattle and riding Billâ€™s favorite horse Blondie and Darleneâ€™s favorite horse Blackie. Bill was an excellent cook famous for his steak, burgers, catfish, shrimp boil, biscuits and gravy, and chocolate cake. In 1976, Bill rode in the last Pony Express in Fort Stockton carrying along with him letters he had written to each of his 6 grandkids at that time. Bill was known as Grandpa to his grandkids, and he poured out affection on all of them giving each their own special nickname. He spent time teaching them to shoot, hunt, fish, camp, drive, and play cards.
In their later years, Darlene gave her life to Jesus and Bill renewed his faith. Together they were part of the Church of Christ in Fort Stockton where they spent several years ministering to the inmates at the local prison. Bill would visit the inmates and teach a Bible class while Darlene would grade the papers of the inmates taking the class.
Bill was preceded in death by his parents, his wife, his brother, Wayne Chambers and wife Wilma of Burkburnett, and his grandson, Justin Kirk Conway of Rockwall.
He is survived by 4 children, Jim Conway of Phoenix, AZ, Mary McKenzie and husband Rex of San Angelo, Gerry Lively of Odessa, and Margaret Cruse and husband Bob of Rockwall, 9 grandchildren, 17 great-grandchildren, and special friends Nancy Snailum and Dorman Vick both of Fort Stockton.
The family will hold a private burial service at the Flying V Ranch in Pecos County, owned by close friends Mickie and the late Roy Neal McKenzie. Bill will be buried beside his wife at the ranch.
To order memorial trees or send flowers to the family in memory of Willie Chambers, please visit our flower store.