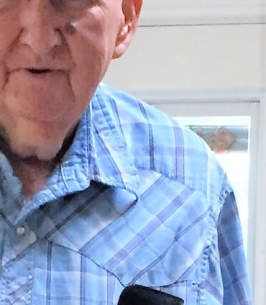 Graveside services will be held at 11:00 am on Tuesday, June 11, 2019, at the Rankin Cemetery in Rankin. Arrangements are under the care and direction of Shaffer-Nichols Funeral Home of Crane.

Willard was born on November 9, 1936, in Winters, Texas. He married the love of his life, Norma Jean Dean on December 21, 1957. Willard had worked for Upton County prior to his retirement. He loved fishing and riding around the lake admiring the wildlife, especially feeding the deer. Willard never met a stranger and he truly loved visiting with his family and friends.

He was preceded in death by his parents, G.W. and Pauline Akeman; sister, Weetona Loehman; nephew, Eddie Loehman; and his precious wife of 58 years, Norma Jean Akeman.

Survivors include his son, Willard Akeman and his wife Sylvia of Ozona; two daughters, Laurie Kindrick and her husband Randy of San Angelo and Sherry Walker and her husband Johnny of Eldorado; 7 grandchildren; 15 great grandchildren; 3 great-great grandchildren and one on the way. He is also survived by three nephews, Ricky, Terry, and Mike.
To order memorial trees or send flowers to the family in memory of Willard Earl Akeman Sr., please visit our flower store.