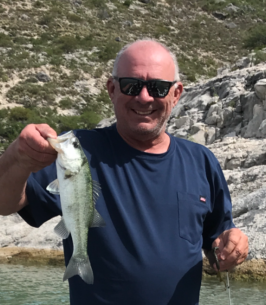 Wayne Douglas Daniell passed away on June 9, 2020 at the age of 58. Wayne is survived by his wife of 32 years Janalynn Daniell and their daughters Jordan Clack and her husband Jeff and Samantha Velasco and her husband Omar, all of Crane. His parents John Dee and Bobbie Daniell of Crane, and siblings Kay Daniell of Abilene, Cindy Metcalf of Durant, Oklahoma, and Rickey Daniell of Snyder. He is preceded in death by his brother Johnny Daniell. He had one granddaughter, Jentri Clack and a grandson, Nicolas Velasco, on the way.

Wayne was born on October 24, 1961, in Abilene Texas. Wayne attended school in Crane and graduated from Crane High School in 1981. Wayne worked in a variety of roles in the oil and gas industry, mainly in gas plants across West Texas with companies such as BP, Apache, Navitas, and most recently Altus. He also worked on off-shore platforms for a couple years. Wayne always had a strong work ethic and spent many nights and weekends out in the field with his co-workers. He was known to spend extra time mentoring some of the younger hands, showing them tough love to help them learn the trade.

Wayne loved spending time with his family and his four-legged best friend Bentley. He was an avid fisherman and spent his free time fishing at Lake Amistad. Due to his competitive nature, he always turned his fishing trips into ‘big fish’ tournaments with whoever was in the boat. He constantly worked with his hands and loved working on cars, motorcycles, boats, or anything else with a motor. He was always in the middle of some engine rebuild, and in his younger years he raced motocross as an amateur. He also occasionally played golf at the Crane Country Club.

Memorial services will be held at 10 AM on Saturday, June 13, 2020 at the Crane County Cemetery with Tommy Parker officiating. Arrangements are under the care and direction of Shaffer-Nichols Funeral Home.

To order memorial trees or send flowers to the family in memory of Wayne Douglas Daniell, please visit our flower store.