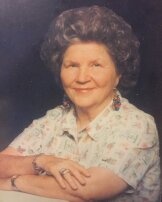 Wanda Faye Watts, 82, of McCamey, passed away on Friday, December 15, 2017, at the Scenic Mountain Medical Center in Big Spring.

Wanda was born on June 15, 1935, in May, Texas to Zeb and Lola Mae Inglet. She had lived in McCamey since September of 1966. Wanda was a member of the East Side Baptist Church.
Wanda was a dedicated volunteer and loved helping out by giving of her time at the nursing home, the senior center and helping deliver meals. She also enjoyed country music and crossword puzzles.

Wanda was preceded in death by her parents; Zeb and Lola Mae Inglet; her siblings, Earlene, Annette, Bob, Juanita, Lois, and Jean.

Visitation will be held at the Shaffer-Nichols Funeral Home in McCamey on Tuesday, December 19, 2017 from 9am to 8pm, with the family receiving friend from 6pm to 8pm.
Funeral services will be held in the Funeral Home Chapel on Wednesday, December 20, 2017 at 2pm with Revered Ted Creech officiating. Burial will follow in the Resthaven Cemetery.
To order memorial trees or send flowers to the family in memory of Wanda Watts, please visit our flower store.