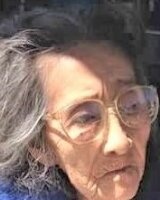 Virginia Ortiz Flores, 83, of McCamey and formerly of Sheffield, passed away on Thursday, March 23, 2017, at the McCamey Convalescent Center.

Virginia was born on June 25, 1933, in Del Rio, Texas. She was a Homemaker and a Catholic. She enjoyed working in her yard, gardening, and tending to her beautiful roses. Virginia loved raising chickens, dancing, and music. She also loved her white dog, Snowball.

She was preceded in death by her husband, Victor; three brothers; two sisters; six grandchildren; and her parents.

Virginia is survived by four sons, and five daughters.
Jesse Flores of Kilgore, Mary Flores of Odessa, Victor Flores of Odessa, Juanita Medina of Fort Stockton, Margie Gaeta of Waxahachie, Felix Flores and his wife Lina of Andrews, Billie Sanchez and her husband Arturo of McCamey, Stephen Flores and his wife Lupe of Andrews, and Chonita Osborn and her husband David of McCamey; two brothers, Jose Ortiz of Abilene, and Octavino Ortiz of Fort Worth; two sisters, Maria Elaina Ortiz and Teresa Ortiz, both of Abilene; 34 grandchildren; 70 great grandchildren; and 3 great-great grandchildren.
To order memorial trees or send flowers to the family in memory of Virginia Flores, please visit our flower store.