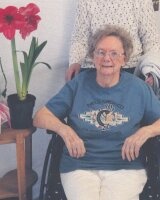 Verla Mae Flading, 89, of McCamey, and formerly of Buffalo, New York, passed away on Monday, June 27, 2016, at the McCamey Hospital.

A private memorial gathering will be held at a later date.
Arrangements were under the care and direction of Shaffer-Nichols Funeral Home.

Verla was born on May 6, 1927, in Buffalo, New York. She had lived in McCamey since 2011. She was a Methodist, and was missionary nurse in EspaÃ±ola, New Mexico. Verla loved writing poems, music, painting, and collecting music boxes. She also enjoyed playing card games.

She was preceded in death by a sister, Mary Foss; and a brother and sister-in-law, Edgar and Doris Flading.

Survivors include her sister, Alice Kephart of McCamey; her brother, Warren Flading and his wife Ann of Buffalo, New York; and numerous nieces and nephews.
To order memorial trees or send flowers to the family in memory of Verla Flading, please visit our flower store.