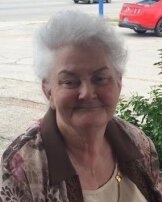 Tennie Dell Blankinship, 71, of McCamey, and formerly of Odessa, passed away on Sunday, July 31, 2016, at the Medical Center Hospital in Odessa.

Funeral services will be held at 11:00 am on Friday, August 5, 2016, at the First Assembly of God Church in McCamey with Minister Donald Potter officiating. Arrangements are under the care and direction of Shaffer-Nichols Funeral Home.

Tennie was born on July 30, 1945, in Robstown, Texas. She was a homemaker and a member of the Church of Christ.
Tennie was an avid reader. She enjoyed reading romance novels, crocheting, and she loved to watch television. Tennie was also very passionate about politics.

She was preceded in death by her husband, Walter (Dub) Blankinship in 1994; an infant daughter, Rhonda Blankinship; three brothers; and two sisters.