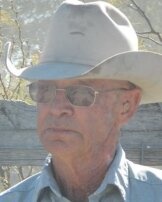 Shannon was born on May 25, 1940, in San Angelo, Texas to Collier and Lila Branham. He married Helen Biediger on August 31, 1962 at the Noelke ranch headquarters in Rankin, Texas.

He was preceded in death by his grandson, Chase Langston; his father, Collier Branham; and his mother, Lila Branham.

Shannon is survived by his wife of 55 years, Helen Branham of Rankin; his children and their spouses, Shot and Peggy Branham of Rankin, Sherri and Robbie Langston of Winters, Shane and Belle Branham of Jayton, Shawn Branham of McCamey, and Shelli and Heath Brooks of Ft. Davis. Seven grandchildren, Randi Carter, Cymber Book, Lakota, Sequoyah, and Maquinna Branham, Maverick and Sadie Brooks. Five great grandchildren, Branham and Laney Ligon, Addison Aguilar, Payzlee and Hudson Book. He is also survived by his brother, Duane Branham of San Angelo; his sisters Maureen Lane of San Angelo, Ann Brooks of Midland, and many nieces and nephews

In lieu of flowers, donations can be made to the Chase Langston Scholarship-P.O. Box 3, Winters, Texas 79567.
To order memorial trees or send flowers to the family in memory of Shannon Branham, please visit our flower store.