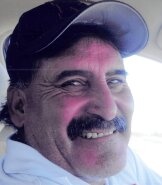 Sammy was born on July 14, 1958, in McCamey. He was a longtime resident of McCamey and a member of the Sacred Heart Catholic Church. He enjoyed woodworking, cooking outdoors, and watching his favorite team, the Dallas Cowboys.
Sammy was one to always make people laugh. He was the life of the party. Sammy loved his family, his grandkids, and most of all his wife, Dawn.