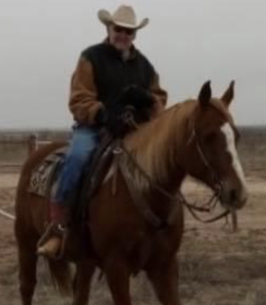 Sammy Ray Hooper was born in Odessa’s Headlee Hospital on November 13, 1938 to Emma Leone and Marven Lester Hooper. He spent his early years on the Eidson Ranch near Penwell. He attended North Elementary School until 1949, when the family moved to the Ranch House Grocery in Crane County. Sammy graduated from Crane High School in 1957 and from Texas Tech University in 1961. He married Nina Gayle Barr as they both finished school at Tech and began their first teaching jobs in Odessa. Sammy was a Christian and a member of the Church of Christ.
After teaching mathematics for 10 years in both Ector and Crane ISDs, he and Nina moved to the Glass-Everitt Ranch on Thanksgiving Day 1968 in the snow. They began their ranching career – raising good sheep, cattle and horses. Sammy served on the agricultural committee, Farm Service Agency, for 30 years. He thoroughly enjoyed his life work until on January 14, 2019, while saddling horses for the days work, he suffered a stroke from which he never recovered.
Sammy was preceded in death by his mother and father. He is survived by his wife of 60 years, Nina, his 2 sons Shawn Ray Hooper and his wife Kellie of Midland and Kyle Robert Hooper and his wife Melissa of Andrews; 8 grandchildren, Storm Ray and wife Mycah of Midland, Michaeli Barrae and husband Chris Tom of Andrews, Brittain Knight and wife Maghan of Odessa, Noah Daniel and wife Alexus of Odessa, Jessica Gabrielle of Odessa, Vanessa Lee of NM, Samray Caleb of Andrews, Paydon Gayle and husband Dalton Kasel of Stephenville, Molly and Blake Merrill of Andrews and Jeremy Browder and Jazmine of Arlington, as well as 13 great grandkids; a brother, Gordon Hooper, a sister, Marvalee Mikkelsen and husband Kent of Rio Rancho, NM, a sister-in-law Sheila Carson and Casey of Odessa, as well as nieces and nephews and treasured friends.
Sammy was very thankful for the Lord’s provision and mercy throughout all the rains, droughts, fire and ice storms throughout the years. His grandchildren will be pallbearers.

To order memorial trees or send flowers to the family in memory of Sammy Ray Hooper, please visit our flower store.