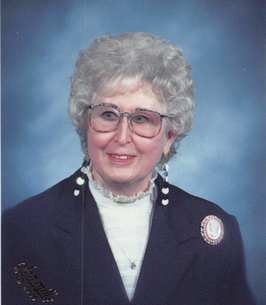 She was born to Charlie and Minnie Bray in Seminole County, Seminole, OK. She lived and was educated in Seminole and worked at Dougans Bros. Grocery store while she was in school. It was in Seminole that she met, and later married, Leonard O. Heald from Healdton, OK. Ruby and Leonard lived in Plains, TX, Denver City, TX, Durant, OK, and Crane, TX. They were happy to celebrate their 65th wedding anniversary together before Leonard passed away in 2007.

Ruby was elected and proudly served as County and District Clerk for 12 years in Yoakum County, Texas. She and her husband Leonard spent many years traveling and spending time in their favorite destination, Branson, Missouri.

Funeral services will be held at 2:30 pm on Friday, February 21, 2020, at the Shaffer-Nichols Funeral Home Chapel in Crane with Minister Mark Hackett officiating. Burial will follow in the Crane County Cemetery.

Ruby Heald was a woman like no other and will be missed by many.
To order memorial trees or send flowers to the family in memory of Ruby Heald, please visit our flower store.