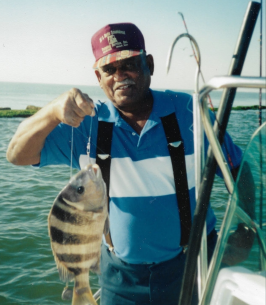 Ruben “Cat” Peterson, Jr.; aka Daddy, Pop, Uncle Sonny, Grandpa, Papaw, Mr. P, Buddy. The list could go on and on. Our father was very active in the community of Rankin for many years. He was a businessman who ran the Buckland Inn, a café that he and our mother owned and worked in for many years as well as being the owner/operator of the Exxon gas station for 40 plus years. He was the first black resident in Rankin to be elected to the city council in 1972 and in 1980 was the only black Mayor in West Texas. He was an active member of the Lions Club and for many, many years on Friday nights you would find him running the chains for and cheering on his sons and the Rankin Red Devil Football team. Our Father loved his family, loved to go fishing and was known to say when asked if he was ready to go on a trip, “Don’t ask me if I wanna go, just tell me when we’re leaving”! He was always packed and ready and waiting, long before it was ever time to ride.

Our Pop opened many doors and closed a few as well. If not for his age, breaking his hip in 2016 and other health issues over the past several years he would still be game for pretty much anything as long as it included spending time with his family and loved ones. He was a fair man, but also a very firm and no nonsense man at the same time. There was a newspaper article written about him in the early 1990’s and the reporter noted that he was not rich, at least in money but that he was wealthy in family, friends and public service. Education, working hard and doing right was the desire and expectation he had for his children, and we would like to believe that we fulfilled these things and made him proud. We will miss his booming voice and laughter, his giant grin and his larger than life spirit. His lover for our Mama was deep, so much so that he followed her from this life to the next one, thirty (30) days after her passing. They are one, once again. Rest well Pop and catch one for us - “Gone Fishin”

Ruben “Cat” Peterson was the sixth (6th) child born to Ruben and Anna Bertha (Wellington) Peterson, Sr. in Brady, Texas o September 2, 1928. Ruben enlisted in the Army in 1945 and discharged in 1946. He was united in marriage to Mary Ruth Williams on January 22, 1955. Together they have eight (8) children who dearly love and miss them both. Ruben was preceded in death by his loving wife of 65 years, Mary Peterson; his parents, Ruben and Bertha Peterson, Sr., his sisters Ruby Ann Burnett, Gracie L. Williams, Amie Dell Lott; his brother Robert Peterson and sister in law Mary Jo Peterson, and his brother Sherman Peterson.

Haven’t I commanded you: be strong and courageous? Do not be afraid or discouraged, for the Lord your God is with you wherever you go. ~Joshua 1:9~

To order memorial trees or send flowers to the family in memory of Ruben Peterson Jr., please visit our flower store.