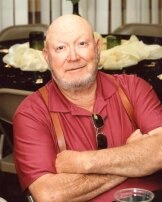 Ruben D. Houston, 75, of Fort Stockton, passed away on Tuesday, May 1, 2018, at the Midland Memorial Hospital.

Graveside services will be held at 11:00 AM (MDT) on Friday, May 4, 2018, at the Tatum Cemetery in Tatum, New Mexico with Reverend Wayne Brazil officiating.
Memorial services will be held at 2:00 PM on Saturday, May 5, 2018, at the First Baptist Church in Fort Stockton with Reverend Neely Landrum officiating. Arrangements are under the care and direction of Shaffer-Nichols Funeral Home of Crane.

Ruben was born on February 5, 1943, in Brownfield, Texas. He married Belva Hebison on June 14, 1964, in Crossroads, New Mexico. He was an active member of the First Baptist Church in Fort Stockton, and the 5:30 coffee group where he enjoyed spending time with his friends.

Ruben was a man of service. When anyone needed help, he was one of the first to offer assistance at his church and throughout the community. He was active in the First Response Ministry at First Baptist, where thousands of weary travelers sought shelter during ice storms or while on evacuation routes from hurricanes.

Ruben was also a faithful and dependable servant for the Wednesday night youth program at FBC, where he feed the children throughout the school year. The youth quickly learned that he might try to act gruff, but he always followed that with his ornery smile and that twinkle in his eyes. He enjoyed working in the baby nursery for over 40 years.

People throughout the area also knew that they could always count on Ruben to provide the meat for their unexpected guests or their family get-togethers. His briskets were sought after by many. He was the owner and operator of Cueballâ€™s Catering.

Ruben loved life. He followed every sports activity in which his boys participated. He really enjoyed Evening Lions service projects, earning the Melvin Jones Fellowship Award. Ruben was also active in the Emmaus Community. He loved being with friends, and family whether at church, dinner club, traveling, or playing games. He was a loving husband for over 53 years, but a wonderful friend for much longer. He and Belva played trucks and cars together from the time they were young children.

Ruben was preceded in death by his parents, Rudolph and Lorena Houston; three sisters, Nola Leach, Claudia Barr, and Trela Cannon; and one brother, Wayne Houston.