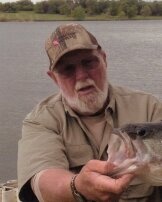 He was preceded in death by his parents Alfred and Emma Wolfe and his brother and sister- in-law, Dennis and Sandy Wolfe.

Roger served as a computer operator in the Air Force from 1966-1969. He moved to Austin in 1970 where he worked as a computer operator for an electric coop and briefly moved trailer houses. He then started his career in construction. He moved to McCamey in 1973 and started his own small construction business. He bought and operated Bakersfield Exxon in 1984 which he ran until his passing. He and his wife Marsha also successfully ran the M&R Ranch (Nevill Farms) where they raised cattle. Whether it was pulling the 5th wheel or taking the Yukon, Roger loved traveling all over the country, his favorite place was any place that had a casino. He also had a passion for fishing in his spare time.

Funeral service will be at 11:00 a.m. on Monday, February 19, 2018 at Shaffer-Nichols Funeral Home in McCamey, burial will follow at Resthaven Cemetery. Viewing will be from 11:00 a.m. to 8:00 p.m. on Sunday February 18, 2018, at the funeral home with the family receiving friends from 3-5 p.m.
Arrangements are under the care and direction of Shaffer-Nichols Funeral Home of McCamey.

In lieu of flowers, please send donations to St. Jude Childrenâ€™s Research Hospital or Make a Wish Foundation.
To order memorial trees or send flowers to the family in memory of Roger Wolfe, please visit our flower store.