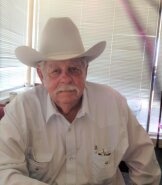 Bobby was born April 20, 1940 south of Sanderson. He was raised in west Texas and graduated from Bledsoe high school in 1958. He joined the Air Force in 1962 and was stationed in Guam. He married Joyce in 1963 and Robin was born a year later in Amarillo. He came home to Sheffield and became an entrepreneur, opening a filling station and later a trucking company. He became a police officer in 1989 thus beginning a 17-year career in public service. Retirement did not stop Bob Tims. He spent his golden years leading music at Mother Holmes Memorial Baptist Church in Sheffield and inspecting the city water. He loved to drive to San Angelo on Wednesdays for lunch with his grandchildren, or to Oklahoma to visit his brother, nieces, and nephews. He was a friend to many and will be missed by all.

Memorial services will be held at 2:00 pm on Sunday, September 23, 2018, at the Mother Holmes Memorial Baptist Church in Sheffield. Military Honors will follow the service at the Sheffield Cemetery.
A lunch will be held prior to the service at 12:30 pm at the Community Center in Sheffield.
To order memorial trees or send flowers to the family in memory of Robert Tims, please visit our flower store.