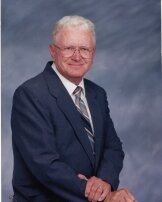 Robert was born on November 19, 1931, in Smithland, Iowa. He married Verna Davis on July 9, 1950, in Rogers, Arkansas. Robert was an Instrumentation Supervisor for Phillips Petroleum, retiring in 1986. He had lived in Iraan for 19 years, and was a member of the First Baptist Church. Robert enjoyed trail riding for over 25 years. He was an avid golfer, and a member of the Lions Club.

Robert was preceded in death by his son Harold Lewis Sigmon; and a granddaughter, Tracy Diane Hale.

Robert is survived by his loving wife, Verna Sigmon of Iraan; his daughter, Linda Dewitt of Odessa; his son, Robert Sigmon and his wife Sherry of Whitney, TX; one sister, Eula Mae Gustafson of San Diego, CA; six grandchildren; and eleven great grandchildren.

The family will be receiving friends at the Shaffer-Nichols Chapel in Iraan on Wednesday, December 28, 2016, from 6:00 PM until 7:00 PM.
Funeral services will be held at 11:00 AM on Thursday, December 29, 2016, at the First United Methodist Church in Iraan with Brother Jimmy McCutcheon officiating. Burial will be held at 3:00 PM on Thursday at the Sunset Memorial Gardens in Odessa, Texas. Arrangements are under the care and direction of Shaffer-Nichols Funeral Home.
To order memorial trees or send flowers to the family in memory of Robert Sigmon, please visit our flower store.