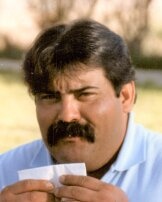 Robert C. â€œGrannyâ€ Granado, 63, of McCamey, passed away on Wednesday, April 25, 2018, at the Midland Memorial Hospital in Midland.

Robert was born on October 8, 1954, in McCamey, Texas. He was a longtime resident of McCamey and a member of the Sacred Heart Catholic Church.
He enjoyed camping, fishing, hunting, and guns. Robert was a true craftsman and was known for his metal art. His true love was for his family and granddaughters as well as family get togethers.

He was preceded in death by his parents, Apolonio and Maria Granado; his son, Nicholas Robert Granado; two sisters, Ester and Emma Granado; two brothers, Noe and Frank Granado; and a nephew, Ralph Granado.