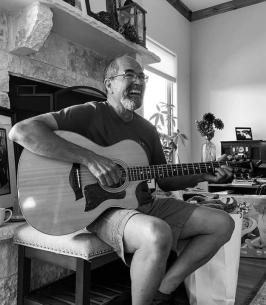 Ricky was born in Crane, Texas to Ismael and Julianna Heredia on December 5, 1956.

Ricky was born and raised in Crane and graduated from Crane High School in 1975. After graduation he married the love of his life, Martha on July 31,1975. Ricky went to work for Gulf Oil to provide for his family. He was a devoted, hard working, faithful employee for 41 years. He retired in 2016 from Chevron. After retirement Ricky enjoyed playing his guitar, taking care of his lawn, building various wood projects, and following his grandkids around. He never met a stranger and always saw the best in people. Win or lose he was a faithful Dallas Cowboys Fan.

The Lord gifted and called him to be a worship leader and psalmist. The Lord would put music in his heart and he would play it out on the guitar and then the words would come to create his song. He has several songs he wrote that he would play during worship at church services.

The family will receive visitors on Thursday, February 24, 2022, at Shaffer-Nichols Funeral Home from 6-8. A celebration of life will be held on Friday, February 25, 2022, at 2:00 P.M. at Shaffer-Nichols Funeral Home followed by a burial at Crane County Cemetery.
To order memorial trees or send flowers to the family in memory of Ricky Heredia, please visit our flower store.