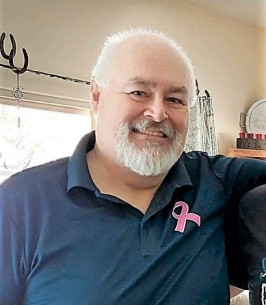 Richard Thomas Hugendubler
Richard Thomas “Huggy” Hugendubler, a man of singular composition, departed this world for heaven on March 26, 2022 in Crane, Texas. Huggy was born to Harvey and Eleanor Hugendubler on the 9th of February 1955 at Fort Knox, Kentucky.

He traveled a varied and rocky road to land in the world of professional education, ultimately serving most of his career in Crane, Texas. While serving as the speech and drama instructor in Crane, Richard provided an environment where students were challenged to think beyond themselves and see a broader world. As the One Act Play director, he selected plays which enabled students to extend their talents and opened their eyes to new avenues of expression. While in the classroom Huggy encouraged students in his own singular way to think before speaking.

As a friend, Richard was ever present to provide assistance of all varieties: A strong back, a quick joke, or a listening ear. His towering presence, not just in physical stature, but in energy and involvement drew people to him. That singular composition made him a mainstay in the ministries of First Baptist Church.

Richard is preceded in death by his parents, his sisters Katherine Hugendubler Stefanko and Barbara Hugendubler Hatch.

He is survived by his sister Regina Hugendubler of Crane and his nieces DioreAnn Scargill and Denise Childs of Arizona. Great nephews include, Dillon Cage, Thomas Friedlander, Kevin Kimmerling, a great niece, Glory Gwilt all of Arizona, and several cousins in Pennsylvania, Ohio and Texas . Let us unite with them in this time of healing hearts torn by grief. All may take comfort in the knowledge Richard, while in Crane, came to know the importance of a relationship with Jesus Christ.
To order memorial trees or send flowers to the family in memory of Richard Hugendubler, please visit our flower store.