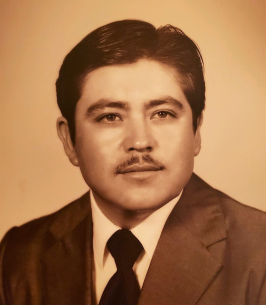 Raymundo Carrasco was born in La Esmeralda, Chihuahua, Mexico in 1946.
He grew up in a loving and large family. Being the second youngest he was very loved and protected. He was raised in a farming community. On one occasion, as a small boy his father early one morning had him on a burro and went out to the fields, and he asked him to stay put while he tended to something. He told his father, “Where am I going to go in the dark on this burro?” “I can’t see anything.” He always seemed to have a quick response. As a boy this may have earned a few quick responses from his parents as well.

He grew into a young man and immigrated to the United States in 1964. He met his future wife Hermelinda Nunez in 1967 and married. He began work in his new country in a cafeteria and laundromat. He eventually made his way into the West Texas oil fields. They had their son in 1969 and he enjoyed a long career as an operator leading a crew on a pulling unit. He was known for taking care of his crew and doing things the right way. He said “My crew’s safety was my most important focus.” He was also known for being able to handle high risk jobs that other crews wouldn’t touch. He was always calm under pressure. His crew was like family to him and they respected him immensely because they were treated kindly and respectfully by him. He was a good friend to anyone.

Many times if he passed a friend on a highway he would turn around just to pull over to speak with them. His favorite pastime and talent was singing and playing guitar. He played guitar in church, front porches, or anywhere family and friends wanted to join him to enjoy the music he shared. He played guitar to his baby boy as well early in life. He was very musically talented. He even discovered that he could even play the piano by ear. Music was in his soul.

After his retirement he kept busy by driving heavy equipment, and even trucking. In recent years he spent time restoring vehicles and enjoying relaxing time at home. He always had a project to work on and keeping peacefully active enjoying time with his son who returned to West Texas in 2018. They had treasured time working together on his vehicles. He shared his wisdom on vehicles, work, and life. The most priceless gift he left to his son was time with his father. After this time he went to be with the Lord. He leaves many special friends and family with wonderful memories of his joy and exceptional kindness.
He is with his family in heaven who have awaited him and now he sees his Lord who he sang to for so many years.

Raymundo Carrasco was love, strength, and kindness. He will always be with us in our hearts. We will hear his voice again when we are together.
To order memorial trees or send flowers to the family in memory of Raymundo L. Carrasco, please visit our flower store.