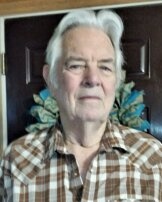 We are here today to celebrate the life and death of Raymond Lynn Hoffman.

Raymond was born on November 8, 1937, to John Raymond and Ruth Hoffman in Benoit, Texas on his parents farm.
Raymond was a US Army Veteran, serving in the National Army Reserves. He married Brenda Joyce Mitchel on August 1, 1995, in Boerne, Texas, but they have resided in McCamey for the last 22 years as husband and wife.

He was member of the Church of Christ. Raymond enjoyed woodworking, making lamps, welding, being a vehicle mechanical and tinkering. He was known for his ability to build almost anything.

Raymond was preceded in death by his parents, John Raymond and Ruth Reed Hoffman; his daughter, Kari Lynn Gronau; and his step-daughter, Tamela Gaye Mitchel; and his sister, Marla Sue Hanna.

Funeral services will be held at 2:00 pm on Sunday, December 3, 2017, at the Shaffer-Nichols Funeral Home Chapel in McCamey with Reverend David Rodriguez officiating. Burial will follow in the Resthaven Cemetery.
To order memorial trees or send flowers to the family in memory of Raymond Hoffman, please visit our flower store.