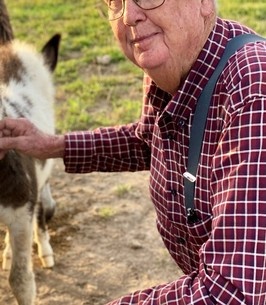 George Rayford (Ray) Bland, 82 of Crane, died peacefully in his sleep at home on Wednesday, July 22, 2020. Ray was blessed with good health, and it continued right up to his passing.

Ray was born as George Rayford Bland on April 13, 1938, in Oxford, MS, to Fred and Clister Jo Bland. After high school, he moved to Andrews, TX. From there, Ray served briefly in the US Army. He returned to Monahans, TX and began his career with Texas Electric. He moved to Crane in 1963 with the Electric Company, where he worked until he retired with 36 years of service.

Ray was an active resident of Crane and was a jack of all trades. He spent time working atop countless telephone poles, served on the Crane Volunteer Fire Department, worked as a jailer, a carpenter, a cook, a ranch hand, and was a proud member of the breakfast club and Masonic Lodge. Ray was well known for his story-telling and insightful expressions.

A graveside service will be held on Saturday, July 25, 2020, at 10 a.m. at the Crane County Cemetery with Pastor David Evans officiating. Arrangements are under the care of Shaffer-Nichols Funeral Home.

The family welcomes donations to First Baptist Church of Crane as an expression of sympathy in place of flowers.
To order memorial trees or send flowers to the family in memory of Ray Bland, please visit our flower store.