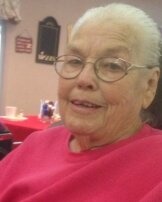 Polly Sherrill Ingram Pearson AKA â€œAunt Pollyâ€ passed from this life to her heavenly home in glory after 82 years of life the morning of January 23, 2017. Polly was born February 7, 1934 in Clyde, Texas to Loman Jack and Ollie Mae Sherrill. The family moved to west Texas where they lived in the Sandhills Camp outside of Crane, Texas. She attended school in both Grandfalls and Crane before dropping out at grade 11. One of her proudest accomplishments was obtaining her GED in later years.

Polly and G. Berry Ingram Jr, eloped to Carlsbad, NM, (with her mother in tow), and were married January 17, 1953. This began a series of moves due to his job. She enjoyed sharing that they moved 54 times in fifteen years before settling in Crane, Texas where they raised their three children. Polly worked numerous part time jobs, cooking hamburgers and in retail, but was best known for the many years she babysat children in her home. Polly was a long-time member of Tabernacle Baptist Church of Crane where she taught Sunday school and then served as assistant Nursery keeper. Later she took over
as the main nursery keeper until her health prevented her to continue in that role. She loved children
and was intentional in telling them all about Jesus and how much he loved them.

She lost Berry in 1981 and some years later married Bill Pearson and moved to Fairfield, Texas where she enjoyed fishing at her leisure and loving on his family. Due to health issues, she moved back to Crane. Bill passed away in 1998, leaving her once again a widow, and she continued to serve in whatever capacity she was able.

Polly moved to the Crane Rehab and Nursing Facility when it was medically deemed that she could no
longer live alone due to Dementia and other medical conditions. Polly always greeted others with a
smile and kind word even as her health deteriorated.

Polly was preceded in death by her parents, Jack and Ollie Sherrill, both husbands, G. Berry Ingram Jr
and Bill Pearson, step- daughter, Geneva, and step grandson, Randy. She is survived by her sister Mary
Young of De Leon, TX, and brother William (Bill) Sherrill of Blanket, TX; two sons, Richard Ingram and
wife Carolyn of Austin, TX, Berry Jack Ingram and wife Candy of Crane, TX, daughter, Joetta Watson and
husband Walter of Dickinson, TX and Step-daughter Jackie Bernard and husband
David of Arkansas. She is also survived by her greatest treasures, 6 grandchildren and four great grandchildren, numerous nieces and nephews, and her dearest friend and partner in crime, Betty Hyche.

Polly was a Proverbs 31 woman. â€œHer children rise up and call her blessed; her husband also, and he
praises her: Many women have done excellently, but you surpass them all. Charm is deceitful, and beauty is vain, but a woman who fears the LORD is to be praised.â€ Proverbs 31: 28-30