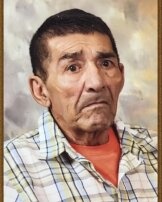 Plutarco â€œTacoâ€ Orozco, 79, of Big Lake, passed away on Monday, February 1, 2016, in the Reagan County Care Center in Big Lake.

Mr. Orozco was born on June 28, 1936, in Mexico. He was derrick man in oilfield, and a Catholic. He had lived in Big Lake for 31 years.
Mr. Orozco was preceded in death by his parents; two brothers, Uvaldo and Anastacio.

Survivors include his wife, Angela Orozco of Big Lake; three sons, Cecilio Gonzalez of Big Lake, Joe Orozco and his wife Elizabeth, and Plutarco Orozco Jr., all of Odessa; one brother; 5 sisters; 11 grandchildren; and 6 great grandchildren.
To order memorial trees or send flowers to the family in memory of Plutarco "Taco" Orozco, please visit our flower store.