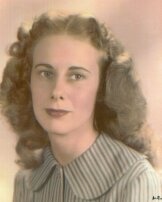 On December 20, 2015, Mildred June Goble Earp went home to be with God.
She was born in Strawn, Texas on August 4, 1925, to Luther and Edith Goble. They moved to Crane from New Mexico when she was in the eighth grade. There she met I C (Tiny) Earp and they were married on June 3, 1944. She was a World War II wife of a Marine for whom she waited faithfully to return home.

The two of them were ranchers in Crane County for 63 years. She loved to be involved in every aspect of her children, grandchildren, and great grandchildrenâ€™s lives. She was a Christian and set the example we needed to observe and follow.

In lieu of flowers, memorials can be made to the West Texas Boys Ranch, Cal Farleyâ€™s, or the Crane County 4-H.

Arrangements were under the care and direction of Shaffer-Nichols Funeral Home of Crane.
To order memorial trees or send flowers to the family in memory of Mildred Earp, please visit our flower store.