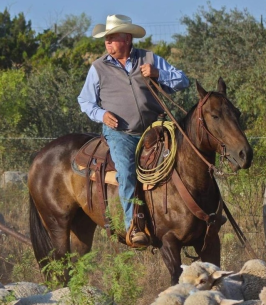 Mike was born December 14, 1951, to Emmett and Mary Jernigan in Monahans, Texas. Mike graduated from Monahans High School in 1970 and was an accomplished athlete in multiple sports. His football career continued at Angelo State University and after graduation he began teaching and coaching high school football. His passion and love for horses led him to meet the love of his life, Mary Jo Hyde, who he married on November 29, 1974, in Ozona, Texas. He and Mary Jo moved to Iraan soon after and Mike began ranching full time. Mike and Mary Jo have two daughters, Regan and Landry, and enjoyed a 46-year marriage.

Mike was a devoted husband, father, grandfather, brother, and friend. He loved working on the ranch with horses and livestock and he also loved spending his free time with his wife, daughters, sons-in-law, and grandchildren. He loved to travel, watch rodeos, and go to all the various sports that his grandchildren were involved in. His grandkids were the light of his life; he drove hours to watch baseball tournaments, cheer competitions, football games, softball games, and basketball games – he did not want to miss a minute.

In lieu of flowers, memorials can be made to:
American Lung Association in Texas, Dallas
8140 Walnut Hill Lane, Suite 106
Dallas, TX 75231
https://www.lung.org
To order memorial trees or send flowers to the family in memory of Mike Jernigan, please visit our flower store.