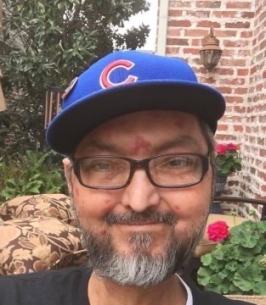 Michael Anthony Carrasco “Big Mike” gained his wings on February 8th, 2022 at the age of 46.

Mike was born to Julio and Anita Carrasco on September 28th, 1975, in Crane, Texas. Mike attended Crane High School and graduated in 1994. He excelled in basketball and went on to play college level. He obtained his teaching degree which allowed him to coach in Midland, Tennessee and eventually returned to West Texas and ended his coaching career in Kermit. He loved coaching, mentoring and spreading the word of God. Mike was an active member of the Good Shephard Catholic Church. He served as the Grand Knight of his local chapter of The Knights of Columbus. He was an avid Chicago Cubs fan and loved sports in general.

He was preceded in death by his big brother “Nunu” Julio “Bear” Carrasco and niece “Ferfer” Jennifer Haley Tavarez.

Anyone who knew Mike, knew his love of people. He enjoyed movies, music and hour-long conversations with his besties. Mike perfected the selfie. Mike’s world was centered around his two daughters who he loved beyond measure. Even when he was not at his best, he could be found in the bleachers or in the audience of a dance recital supporting his girls. He spent hours quoting movies, laughing and eating junk food with them.

In lieu of flowers, his daughters request contributions/donations be made to The American Cancer Society, Youth Sports, Special Needs Programs, Donate Life America and transplant programs. Or the greatest gift of all, sign up to be an organ donor to give someone a second chance at life like their father was given.
To order memorial trees or send flowers to the family in memory of Michael A. "Big Mike" Carrasco, please visit our flower store.