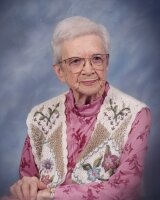 Funeral services were held at 11am on Friday, June 17, 2016, at the Shaffer-Nichols Funeral Home Chapel with Tommy Parker officiating. Burial followed in the Crane County Cemetery.

Mary was born on November 5, 1914, in Roby, Fisher County, Texas to Joe Abbott Mash and Ora Ella McCrary Mash. She grew-up on a farm four miles southwest of Roby. Some boys came by looking for jobs picking cotton, and this is when she met the love of her life and married Chester Box on February 1, 1934. She and Chester raised three children. Mary has been a long time resident of Crane since 1953. She was a member of the First Baptist Church and she loved her Naomi Sunday school class. Mary enjoyed sewing, and when she was younger, she had a tax preparation business.