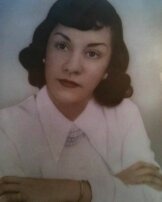 Mary Cuellar Arana, 90, of McCamey, Texas, received her ultimate healing when she was welcomed into Godâ€™s embrace on Friday, September 15, 2017. Mary had resided for six years under the tender-loving care of her daughter and familyâ€”Rose Mary and Domingo Lunaâ€”and granddaughter and great-grandsonâ€”Nicole Padilla and Zayne Rathbun. Mary was born on May 19, 1927, in El Paso, Texas, to Julia Cuellar Sanchez, and was raised in Ft. Stockton, Texas.

As a young girl, Mary attended schools in Ft. Stockton, and possessed a compassionate, nurturing, and selfless nature. These unique characteristics led her to the healthcare profession, where she worked as a practical nurse and nurseâ€™s aide. She was a voracious reader and enjoyed starting her day in the Word of God, followed by her News Fix on the world around her in the Odessa Americanâ€”she maintained a subscription to the OA for 57 years (if the newspaper carrier didnâ€™t deliver Maryâ€™s daily edition, her grandkids would tease that they needed to run fast back to Odessa to get a copy of Grandmaâ€™s News Fix). Mary especially liked the Bibleâ€™s book of Esther, because the story of a humble, hard-working girl who loved her family and the Jewish people, deeply resonated in her soul. Her mornings were also routinely complemented with coffee and, in her later years, she took a shine to steaming cups of cappuccino. Mary poured over articles about healthcare and medicine and kept the Family Medical Guide nearby because she maintained a regimen of nutrition, fitness, and vigorous counter-attacks on illness. Maryâ€™s bookshelf was continuously stocked with reading materialâ€”about the life of a Christian, How-To remedies, politics and government, and leadership. She eventually lost sight in one eye, but it didnâ€™t reduce her reading time when she put to good use a sturdy and decades-old magnifying glass.

She was a meticulous organizer and kept copious notes on a variety of topics. She was a profound thinker and was told by family members that she would be a wise and erudite judge in the new Heaven and the new Earth. Maryâ€™s sister and husband, Edna and Sabas Marquez, of Austin, shared that Mary lived a Holy life and treated everyone with respect and kindness, and was a Saint with a beautiful spirit. Mary was a stickler for balance and partook of simple, yet meaningful, pleasures such as spending time daily in the courtyard outside, taking in the sun and communing with God and her buddies: a white dove, a flitting red robin, small sparrows, and neighborhood animals that brought joy to her days.

She married Jose Morales Arana in 1952, and thus began a partnership of 59 years, 11 children, 17 grandchildren, and eight great-grandchildren, and residencies in Rankin, Ft. Stockton, Lubbock, Alpine, and McCamey. Mary enjoyed Pentecostal tent preachings, and regularly watched TBNâ€™s Paul and Jan Crouch, Joyce Meyer, and Jimmy Swaggart. Two of her favorite charities, which she supported, were St. Judeâ€™s Childrenâ€™s Hospital, several ministries, and Cal Farleyâ€™s Boys Ranch, to mention a few. This pioneering spirit of a woman valued propriety, justice, core values, and righteousness. She provided lectures to the grandkids about being kindly affectioned toward one another (Romans 12:10-21, KJV) about the Lord, Jesus Christ, and about being a good person. â€œDonâ€™t forget about Jesus, He Loves YOU,â€ Mary would tell the children.