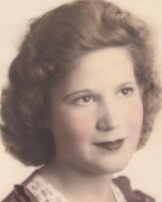 Mary Francis "Frankie" Adams was born on September 4, 1930 in Pioneer, Texas. She passed away April 7, 2016 in McCamey, Texas surrounded by family.

She was one of 6 children born to Jesse and Lillie Anna Fenwick. She married Hubert Adams on June 23, 1946, and they were married 63 years before Hubert's death in 2009. In 1946 they moved to McCamey where they raised their 2 children, Shelia and Leslie, and helped raise all 4 of their grandchildren.

Frankie had several jobs while she was in McCamey, including many years as a butcher and many years at Echo Drug. In her younger days Frankie loved dancing and socializing. As she got older she was very involved in the the American Legion Women's Auxiliary, playing golf, and enjoying her time with her Country Club friends.
But Frankie's best role was that of "Mom" "Ma"and "Granny." She fiercely loved her family, and everyone knew that. When her grandkids were playing sports their Granny was always there and she was most often the most vocal person in the stands. Holidays were amazing at Granny's house because she was all about having fun.

Frankie had resided at the McCamey Convalescent Center for the last years of her life where she continued to create friendships and bonds with many of the employees and residents.

Frankie was preceded in death by her parents, 5 siblings, her husband Hubert, her daughter Shelia Blanscet, her son Leslie Adams, her grandson Jason Adams, her great-granddaughter Chystyna.Chavez and her beloved sidekick, Mr. T.