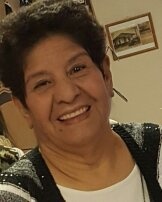 Martha Elva Meraz, 66, of McCamey, passed away on Sunday, January 1, 2017, at the McCamey Convalescent Center.

Rosary will be said at 7pm on Wednesday, January 4, 2017, at the Shaffer-Nichols Funeral Home Chapel. Funeral Mass will be held at 11am on Thursday, January 5, 2017, at the Sacred Heart Catholic Church with Father Laurent Mvondo officiating. Burial will follow in the Resthaven Cemetery.

Martha was born on March 6, 1950, in Mexico. She was a homemaker and was a longtime resident of McCamey. She married Librado Meraz Sr. in 1965 in Mexico. Martha loved to cook and was excellent in making sweet bread. She loved gardening, her houseplants, and most of all spending time with family.

She was preceded in death by her son, Jesus Meraz; a sister, Gloria Torres; and a brother, Manuel Torres.