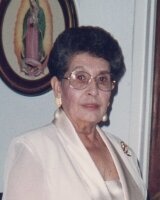 On Tuesday, August 23, 2016, Maria Cruz Tarin went home to be with the Lord God our Savior.
She was born in Presidio, Texas on May 3, 1929, to Dominga and Estanirlo Hernandez and moved to Grandfalls, TX when she turned 20. She later met Emilio Tarin and they were married December 1, 1950. They both moved to Crane, TX in 1969 in which Maria Cruz worked for the CISD and Emilio for the City of Crane. She retired 15 years later.
She loved being involved in every aspect of her children and grandchildrenâ€™s lives. She was an excellent cook and her wonderful meals would bring the family together every time she cooked. She was a strong believer in her Catholic faith and set the example by her continuous commitment in attending church every Saturday.
She was preceded in death by her husband, Emilio Tarin; son Jose Emilio Tarin; mother Dominga Hernandez; father Estanirlo Hernandez and sister Matilde Cortez.
She had 2 daughters, Sandra Marquez and husband Oscar Marquez of Crane, Jennifer Heredia and husband Roy Heredia of Crane; 3 sons, Efren Tarin and wife Aurora Tarin of Odessa, TX, Roy Tarin of Lubbock, TX and Lupe Tarin and wife Cristy Tarin of Crane. 17 grandchildren and 28 great grandchildren.
Services for Mrs. Tarin will be held on Friday, August 26, 2016 at the Good Shepherd Catholic Church in Crane at 11:30 AM. Burial will follow in the Crane County Cemetery.
Arrangements are under the care and direction of Shaffer-Nichols Funeral Home of Crane.
To order memorial trees or send flowers to the family in memory of Maria Cruz Tarin (Hernandez), please visit our flower store.