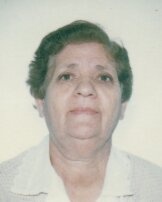 Elena was born on September 17, 1938, in Mexico. She was a homemaker and she lived in Crane for eight years moving here from Mexico. She loved to watch Spanish soap operas. She was an avid reader. Spending time with her family and having get- togethers meant the world to her as she was a great cook, and she loved to spend time in her flower garden. She was a member of the Good Spepherd Catholic Church in Crane. She was preceded in death by her parents; and her husband Manuel Hernandez and daughter Anamaria Hernandez.

Survivors include her son, Mario Hernandez and wife Josephina; a daughter Ana Aragon and husband Marcos all of Crane. One brother; Trini Trejo, Sisters; Carmen Trejo, Manuela Trejo and Cruz Trejo all of Mexico and six grandchildren.
To order memorial trees or send flowers to the family in memory of Maria Hernandez, please visit our flower store.