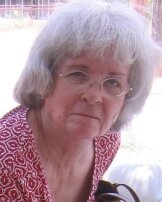 Margaret Ann Ridley, 82, former McCamey, Texas resident Margaret Ann Ridley 82, died on Oct. 10, 2015, at 8:48 pm at the Odessa Regional Hospital.
A rosary will be held at 7:00 pm at the Shaffer-Nichols Funeral Home in McCamey, Texas. The funeral will take place on Wednesday, October 14, at 11:00 am at Sacred Heart Catholic Church in McCamey.
Mrs. Ridley was born August 12, 1933, in Kenedy, Texas, to Ben and Betty Muschalek.
She was valedictorian of her McCamey graduating class and later worked as a telephone operator. She had four siblings. Her sister Bernice and brother Sonny preceded her in death, but she is survived by her brother Franklin and sister Mary.
She married Thomas Daniel Ridley in 1954 and had three children. Mrs. Ridley is survived by her daughter Annette and son-in-law Kent Lake and their six children, Ginger, Adam, Bridget, Anna, Alex, and Joshua. She is also survived by her son Danny and daughter-in-law Susan and their two children Holly and Daniel. She is survived by her daughter Carolyn and son-in-law Jim and their five daughters Elizabeth, Joanna, Rachel, Angela, Becca, and step-daughter Eve. Mrs. Ridley has 21 great-grandchildren.
Prayers and Masses on Mrs. Ridleyâ€™s behalf would be greatly appreciated.
To order memorial trees or send flowers to the family in memory of Margaret Ridley, please visit our flower store.