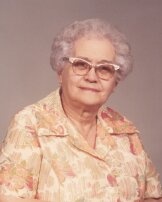 She lived in Bucklin until she met and married Gary Moore, a marriage that lasted 64 years, till his death in 2004. They married on the SMU campus in Dallas, and Gary kept her in Texas the rest of her life. They lived in San Antonio the first 11 years of their marriage, until Gary took a job with El Paso Nat. Gas Co. and they moved to Kermit. Several moves later found them in Crane, which they called home.

Lucille, as she preferred, was a Christian wife and mother, taking their 2 daughters to church on Sundays. She was the Christian example for her husband who in time came to accept Jesus. They were active in the First Christian Church in Crane and the Order of the Eastern Star, where she was known for her homemade rolls. They were transferred one more time to Goldsmith before retiring to Buchanan Lake Village. This turned out to be temporary as they, in time, moved back to Crane. She was a wife and mother, only working a few years, first selling Avon and then as a cook in the old Crane Nursing Home.

Lucille was preceded in death by her parents, four brothers and four sisters.
She is survived by her daughters, Linda and husband Bob Boyd of Crane, and Barbara Moore of Odessa, one brother, Gene Ferrin of Olathe, KS.; two grandsons, Gary Boyd and wife Kathy, of Andrews and Stephen Boyd of Crane, and 2 great grandchildren, Jade Boyd of Andrews and D. Boyd, and many nieces and nephews.

Graveside services will be Monday, Sept. 25, 2017, at 11:00, in the Crane County Cemetery. Instead of flowers, please make a donation to the charity of your choice.
Arrangements are under the care and direction of Shaffer-Nichols Funeral Home.
To order memorial trees or send flowers to the family in memory of Lucille Moore, please visit our flower store.