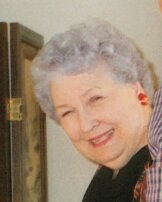 Louise Roberts, 98, of McCamey, passed away on Wednesday, November 25, 2015, in the Medical Center Hospital in Odessa.

Funeral services were held at 2:00 PM on Saturday, November 28, 2015, at the Shaffer-Nichols Funeral Home Chapel in McCamey with Minister Steve Horton officiating. Burial followed in the Resthaven Cemetery.

Louise was born on June 7, 1917 in Tar River, Oklahoma to William Thomas Shelton and Bessie Ann Snyder Sheldon. She married the love of her life, Gilford Roberts on February 8, 1936. She had lived in McCamey since December of 1962, and was a homemaker.
She was a longtime member of the Church of Christ, having been a member for 80 years. She and Gilford loved to travel, and they loved spending time in Colorado with friends, and did so for many years. Louise was an avid reader. She was a reader of geography, and history. Louise was known for her home always being immaculate.
She was preceded in death by Gilford on May 14, 2009.