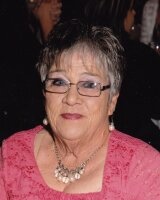 Funeral services will be held at 2 p.m. Monday, July 18, 2016, at the First United Methodist Church with Reverends David Sanchez and Ted Creech officiating. Burial will follow at the Resthaven Cemetery with arrangements under the direction of Shaffer-Nichols Funeral Home.

She married Henry Lee Watson on May 20, 1961 and was married until his death in 2010. Lou Ann and Henry moved to McCamey in 1970. Lou Ann was very active in the community and spent a great deal of time supporting her children and grandchildren at different events. She loved to play golf, visit with friends and spend time at Lake Amistad. Mom did not show her age, she was always young at heart and her glass was always half full!!

Lou Ann was preceded in death by her parents and her husband. She is survived by her daughter, Cindy Watson Montgomery and husband Darrel of Austin, Texas; her sons Greg Watson and wife Lynette of Midland, Texas; Craig Watson and wife Randi of Spring, Texas; her brother Doyle McKinzie and wife Brenda of Dike, Texas; her mother in-law Lela Mae Watson of Atlanta, Texas and sister in-laws Linda Whitley and Betty Williams both of Atlanta, Texas. She was a proud grandmother, known as â€œMingieâ€ by her grandchildren: Gentry Watson Staugh and husband Fred, Tyler Watson and fiancee Carly Salinas, Kasey Montgomery, Dakota Montgomery, Hayes Watson and Hatcher Watson. Lou Ann was also a great- grandmother to Lawson Staugh, Harlon Staugh and Penelope Watson. Lou Ann will also be fondly remembered by many nieces and nephews along with many friends including her very special friend Bill Bailey of Ft Stockton, Texas.

In lieu of flowers memorials may be made to the American Cancer Society or the Susan G. Komen Breast Cancer Foundation.
To order memorial trees or send flowers to the family in memory of Lou Ann Watson, please visit our flower store.