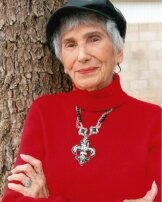 Loretta was born on October 30, 1926, in New Orleans, LA to Alexander Joseph and Elizabeth Steinkamp Roussarie. She was a longtime resident of Jal, living there for 40 years.

Loretta enjoyed working in her yard, making porcelain dolls, dancing, and playing bingo. She loved to bake, decorate for the holidays, and cook for family. Loretta was a member of the St. Cecilia Catholic Church, and the Jal Senior Center.

Funeral services will be held at 2:00 PM on Tuesday, January 2, 2018, at the Shaffer-Nichols Funeral Home Chapel in Crane with Tommy Parker officiating. Burial will follow in the Crane County Cemetery.
Pallbearers will be Paul Smith, Brodey Smith, Gerimie Smith, Alex Taylor, Lagen Smith, and Tanner Ruiz.
Arrangements are under the care and direction of Shaffer-Nichols Funeral Home of Crane.
To order memorial trees or send flowers to the family in memory of Loretta Smith, please visit our flower store.