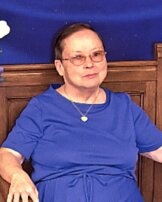 Lorene Kennedy was born on December 9, 1942 in Winters, Texas to Johnny William and Flora Gertrude Lancaster. She was a devoted Wife, Mother, Grandmother and Great Grandmother.

She was preceded in death by her Parents and Two brothers J.T. And Robert Cecil Lancaster two sisters Estelle Horton and her twin sister Florene Kennedy and her husband of 46 years Weldon Odell Kennedy.
To order memorial trees or send flowers to the family in memory of Lorene Kennedy, please visit our flower store.