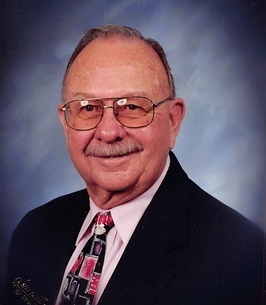 Lewis Overton, 88, of Crane, passed away on Wednesday, August 12, 2020, at the Medical Center Hospital in Odessa.

Lewis was born on April 6, 1932, in Glasscock County, Texas. He proudly served in the US Navy during the Korean War on the USS Zellars as a Petty Officer. He was Honorably discharged in June of 1954.

Lewis moved to Crane in January of 1965. He worked for Harbison-Fischer for 16 years in oilfield sales. Lewis married Wanda Overton in June of 2000 in Abilene, Texas.
He served as Crane County Commission for Precinct 2 for four years. Lewis was a member of the First Baptist Church in Crane and the Crane Noon Lions. He was faithful to make sure campers had transportation to the Texas Lions Camp and was a loyal donor. He enjoyed traveling, reading, and was a true history buff.

Lewis was preceded in death by his first wife, LaWan in 1984; son, Rodney Overton; stepson Rodney Hatfield; and three brothers.

Graveside services will be held at 10:00 am on Monday, August 17, 2020, at the Trinity Memorial Park Cemetery in Big Spring with Reverend David Evans officiating. Arrangements are under the care and direction of Shaffer-Nichols Funeral Home.

In lieu of flowers, memorials can be made to the First Baptist Church in Crane-101 E. 20th Street, Crane, Texas 79731; or the Texas Lions Camp-P.O. Box 290247, Kerrville, Texas 78029.
To order memorial trees or send flowers to the family in memory of Lewis Overton, please visit our flower store.