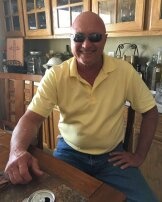 Kenneth Eugene Penn, age 60, of Crane, Texas passed away suddenly at his home in the early morning hours of January 3, 2018.

â€œEugeneâ€ as his friends and family called him, was a hard working, fun loving, hard playing, and sometimes obnoxious man that loved his family dearly. He was very straightforward in his speech and didnâ€™t mind telling anyone who would listen that he was proud of his family, his fast cars, and his sometimes crazy antics.

Eugene was born in Andrews, Texas to Kenneth and Annette Penn on July 20, 1957 and began his construction career early by working with his dad as a teenager. Eugene and his wife, Gwen, began Penn Trucking and Construction in 2013 and the business continues to thrive in the oilfield thanks to Eugeneâ€™s immense knowledge of the oilfield construction business and Gwenâ€™s patience and ability to manage the office and Eugene.

Eugeneâ€™s family will miss his laughter and unique sense of humor and feel quite certain that he is currently entertaining all those who predeceased him.

Survivors include his wife Gwen Penn of Crane; his daughter, Katie Jo Penn of Cisco; two sons, Dylan Wade Penn and Eathan Kyler Penn, both of Eastland; his mother, Dorothy Annette Crockett of Hobbs, NM, and his sister, Gina Ann Reeves of Cisco.

Arrangements are under the care and direction of Shaffer-Nichols Funeral Home of Crane, and Kimbrough Funeral Home of Cisco.
To order memorial trees or send flowers to the family in memory of Kenneth Penn, please visit our flower store.