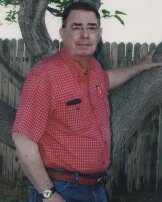 Judge John Farmer went to be with Our Lord and Savior, Saturday November 18, 2017.

John was born October 19, 1949, in Lexington, Mississippi, to the late Johnnie and Martha Farmer. The family moved to McCamey, Texas, in 1963 and then Crane, Texas, in 1966. John graduated from Crane High School in 1968. His sister Evelyn moved on with family to Odessa, Texas, in 1968. John went on to Odessa College and was employed with the Texas State Highway Department in Crane.

John was hurt in an accident in 1974. John was told he would never walk again. Well, God had other plans, â€œA Miracleâ€ he walked out of Houstonâ€™s TIRR.

John loved the Judgeâ€™s job and always tried his best to be fair and find answers if he didnâ€™t know. His bright personality and knowing his job was key.

John loved his wife Beverly, Daughter Amy, Son Scott but, his â€œSpecial Sunshineâ€ now was his Granddaughter, Paisleyâ€¦those two made the world-go-round.

John fell ill this last week and with great pain left this old world. He had fought like a champ and will always be remembered as One of the Best!

John is survived by his wife of 47 years, Beverly Farmer of Crane; children Amy Ramirez and her husband Eddie of Midland, TX and Scott Farmer; granddaughter, Paisley Ramirez of Midland; Sister Evelyn King and husband Ronnie of Odessa; and nephew John Phillip Roberts of Odessa.

The family will be receiving friends at the Shaffer-Nichols Funeral Home on Tuesday, November 21, 2017 from 6:00 pm until 8:00 pm.
Funeral services will be held at 11:00 am on Wednesday, November 22, 2017, at the First Baptist Church in Crane with Reverend David Evans officiating. Burial will follow in the Crane County Cemetery.
Pallbearers will be Dennis Young, Kelly Nichols, Larry Vanderveer, Todd Seabourn, Ray Weatherby, and Ronnie King. Honorary Pallbearers will be Eddie Ramirez, John Phillip Roberts, Kenneth Abbott, Keith Martin, and Domingo Escobedo.
Arrangements are under the care and direction of Shaffer-Nichols Funeral Home of Crane.
To order memorial trees or send flowers to the family in memory of Judge John Farmer, please visit our flower store.