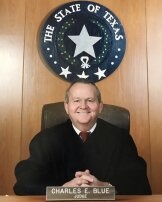 On the First of September, 2017, Charles Edward Blue walked with Jesus into the gates of Heaven. Charles "Fiddle" Blue was born to T.H. and Tolva Blue in Shamrock, Texas on December 29th, 1933, the second of eleven children. He attended Rankin High School and graduated from Bronte High School in 1952. He married his sweetheart, Douglas Ann Wilson Blue on October 31, 1953 in Iraan, Texas. After frequently moving following the oil rigs, they finally found their forever home in Crane, Texas where they raised their two daughters, Vicki Darlene and Charlotte Ann. Charles began his political career by serving as Constable before being elected as Crane County Judge, where he proudly served the community he adored for twenty four years. Fiddle and his dad successfully founded Blue Drilling Company. They were pioneers in the West Texas oil patch. When Fiddle wasn't working, he was very active in Golden Gloves boxing, Lion's Club, along with being a member of the Free Masons, where he achieved thirty-second degree Master Mason and became a Shriner. He was a member of the Chuckles Gang, where every member was President. His heart was so big and so full, anywhere he could volunteer, he was there. He was also a licensed pilot, an avid motorcyclist, an expert keno player, and World's Greatest Man. Every single thing he did for others, he did with genuine humility and kindness. He never expected any praise and in most cases, he refused it. All he cared about was the well being of others.
Charles is survived by his wife of almost sixty-four years, Douglas Ann, and his two daughters Vicki Weaver of Kempner, Texas and Charlotte Blue (James Jenkins) of Odessa, Texas, five grandchildren, Becca Wilcox of Kempner, Texas, Robert Blackman of Woodbury, Tennessee, Emily Thurman of Odessa, Texas, Callie Thurman of Los Angeles, California, and Dustin Weaver (Ashlynne Chase) of Midland, Texas. He also has twelve great grandchildren, Chelsea Weaver of Lufkin, Texas, Courtney Weaver of Kempner, Texas, Carly Sparks (Jared Lovell) of Kilgore, Texas, Chad Weaver, Caleb, Blue, Cara Blue, Briar Blackman, Katie Backman, of Woodbury Tennessee, Corben Garcia, Benjamin "Ahkoo" Garcia, Cade Garcia, all of Kempner, Texas, and Jaycie Kerr of Midland, Texas; and great great granddaughter Samantha Lovell, and two great great grand babies due in October 2017. Charles is also survived by his siblings Theo Blue, Mary Jo Heard, Jerry Blue, Sandra Smylie, Raymond Blue, Carolyn Rempher, Bobby Blue, and Mike Blue.
He was preceded in death by his parents, T.H. and Tolva, his brother Dan Blue and his sister Patsy Acuff, and his son in law, David Weaver.
Services will be held Tuesday, September 5th at 10 am at First Baptist Church in Crane, Texas. Burial will follow in the Crane County Cemetery. Pallbearers will be Carl Wilson, Kent Wilson, Michael Wilson, Pat Wilson, Robert Blackman, and Becca Wilcox.
To order memorial trees or send flowers to the family in memory of Judge Charles Blue, please visit our flower store.