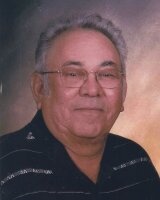 Juan â€œCaruchoâ€ Armendarez of Rankin, Texas went to be with the Lord on Saturday, March 4, 2017, at the Midland Memorial Hospital, surrounded by his family.

Juan was born on May 23, 1942, in Rankin, Texas to Mauro and Estephana Armendarez. He lived in Rankin and met Carolina and they married on February 14th, 1960.

He enjoyed fishing, playing golf, working in the yard, and spending time with his kids, grandkids, and great grandkids.