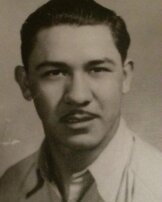 Our beloved Jose O. PiÃ±a entered Heavenâ€™s gates on Saturday, December 15, 2018. â€œJoeâ€ as many knew him was a unique fella. He never met a stranger for too long. His outgoing persona made you want to be a friend of his in no time. He had a temper donâ€™t get us wrong, but not too many wanted to cross that line. Joe loved telling jokes and also at times would pull pranks of family & friends. Just ask his nieces and nephews. â€œThe old pull my finger trick.â€

Joe was born in Ft. Stockton on November 27, 1930 to Domingo Sr. and Rita Ortega Pina. Joeâ€™s mischievous personality began at early age. While attending Catholic school, he would give the nuns a difficult time. He along with other altar boys would partake of the fermented juice, if you know what I mean. Joe began building his resumeâ€™ at an early age. He would help his father & uncle work cattle & other livestock on ranches in the area. By his teen years, he was helping in the family business transporting livestock from El Paso to San Antonio. He even drove an ambulance for a while.
Joe began his career in the oilfield working at The Western Company of North America for 38 years. Due to a near death accident, he was forced to retire. His exceptional reputation followed him throughout the country. He was specially requested many times over to due high pressure acid frac jobs. He was well respected in the oilfields. The stories were always a lively affair that he shared with his children and friends.

Joe was lost being at home in retirement. He then started his own business doing what he loved. â€œJoeâ€™s Acoustics" was basically handyman service. His specialty was cabinet work and painting. His work is appreciated throughout Texas. He had a special place in helping the elderly widows in the area. Many times he only accepted a warm cooked meal for payment. One Rankinite is quoted in saying that â€œI would call him to come hang a mirror or help me hang my curtains. He never would let me pay him. He just asked for a good hot cup of coffee. I would throw in some homemade cookies for a tip.â€ Those acts were some of the ingredients to a long list of his great qualities. Jose was instrumental with the building of The Apostolic Church in Odessa and Midland. He was also involved in the construction and continued maintenance of Faith Assembly of God in Rankin where he served as a deacon for over 25 years.
Joe was a God fearing man who loved Christ, his wife, and kids. He was big on family. He enjoyed practicing his culinary skills on the grill for friends and family. Many of you enjoyed his wide variety of cuisine. You definitely never left the house hungry- quite opposite as a matter of fact.

Joe had one love in his life that was Maria C. Pina. He met her at the tender age of 9, and fell in love. 10 years later they married in McCamey, TX on September 11, 1948. In their 69 year marriage, they loved their four children, four grandchildren, and 11 great grandchildren.
Joe was preceded in death by the love of his life Maria C. PiÃ±a, both his parents Domingo Sr. and Rita PiÃ±a, his two brothers Domingo PiÃ±a Jr. and Richard PiÃ±a. He was also preceded in death by his daughter Rita PiÃ±a and great grandson Brett PiÃ±a. He is survived by four children; Jacob David PiÃ±a of Odessa; Adam PiÃ±a (Francis) of San Angelo, Mario Daniel PiÃ±a (Karen) of Coppell, and Dianna PiÃ±a of Rankin. Honorable Mentions are Michael Holguin, Adrian Sanchez, Pete Fuentes, and Darla Cann all of whom were close and dear to the Jose PiÃ±a family.

The family would like to take this time to express their gratitude to the nursing and medical staffs of RCHD, MCHD, McCamey Convalescent Center, Interim Health Care, and Elite Physical Therapy. You all played a very important part in the care of Jose during the past 6 years. God bless and Keep you all.
To order memorial trees or send flowers to the family in memory of Jose Pina, please visit our flower store.