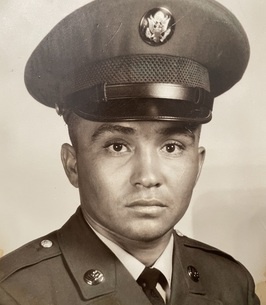 Johnny A. Dominguez, a longtime resident of Crane, TX, passed away on Monday, December 13th, 2021 at the age of 77 after being admitted to the hospital a few weeks earlier.

He was predeceased by his brothers Carlos Dominguez, Raymond Dominguez, and Miguel Dominguez; and his granddaughter Cameron Kay Dominguez.

Johnny was born in Imperial, TX on October 17, 1944 to Emilio Dominguez and Anita Dominguez. He graduated from Imperial High School in 1964 and enrolled into the Army on August 29th, 1967. He returned home from active duty on August 28th, 1973 and met the love of his life a few years later. Lydia and Johnny were married on April 8th, 1978.

Johnny worked at the El Paso Natural Gas plant in Crane for many years. He finished his career with Chevron.
Johnny was an avid golfer. He enjoyed spending many afternoons and weekends playing a round of golf with his friends and family. He also enjoyed working in his yard. However, he most enjoyed spending time with his grandchildren as they brought endless joy to his life. He will be deeply missed by his friends, family, and all who knew him.

A lunch in Johnny’s honor will be served at noon, followed by a funeral service scheduled for 2:00 pm on Friday, December 17th at the Tabernacle Baptist Church, located at 207 W. 5th St. in Crane, TX.
To order memorial trees or send flowers to the family in memory of Johnny A. Dominguez, please visit our flower store.