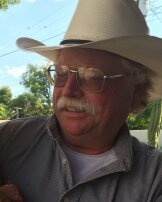 John R. Schroeder, 58, of Crane, and formerly of Monahans, passed away on Wednesday, December 7, 2016, at the Crane Memorial Hospital.

John was born on May 31, 1958, in Wichita County, Texas. He was a US Army Veteran. John married Sherry Maynard in Crane, Texas. He worked for RSP-Permian as a Senior Workover Foreman.

John had lived in Crane since 2007, moving here from Monahans. He was a Christian. John was very laid back and easy going. He was always a loving and happy man and was one to enjoy pulling pranks and being a jokester. John was an avid gun collector. He loved his boxer puppies. He also loved to tinker with things. He would take something apart, just to put it back together to see how it worked.

John is survived by his wife Sherry Schroeder of Crane; and a host of extended family.
To order memorial trees or send flowers to the family in memory of John Schroeder, please visit our flower store.