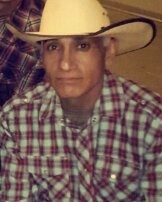 Jody was born on October 5, 1970, in Rankin to Virginia and George Abalos, Sr. Jody graduated from Rankin High School in 1989, and then enlisted with the United States Army, where he was a light-wheel vehicle mechanic during Desert Storm. After his service, Jody returned to the Rankin area to live and work. During this time, Jody had two children, Kelsey and Andres, and two step-children, Elizabeth and Juan Amaya.

Jody was an extremely hard worker for various employers through the years. When he was not working, Jodyâ€™s favorite pass time was playing golf with his friends, were he was an exceptional, self-taught golfer. Jody also enjoyed playing video games with his son and nephews; watching movies, fishing, and camping with family and friends at Camp Wood, and cheering on his beloved Oklahoma Sooners, and Washington Redskins.

Jody had many friends and was always the life of the party. He was known for his smile and ability to create amazing memories for everyone. Jody was also known to be very ornery at times, but would give the shirt off his back to any friend, family, or loved one in need.

There will be a memorial service at 10:00 am on Friday, December 15, 2017, at the Rankin Park Building.
To order memorial trees or send flowers to the family in memory of Joe Abalos, please visit our flower store.