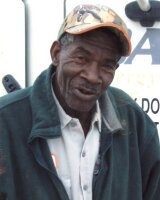 Yea though I walk through the valley of the shadow of death, I will fear no evil for thou art with me, thy rod and thy staff they comfort me. (Psalm 23: 4)

Surely goodness and mercy shall follow me all the days of my life, and I will dwell in the house of the Lord forever. (Psalm 23:6)

He attended grade school and high school at Bethune High School in Crane, Texas where he was the youngest in his class at the age of 15 years old. He was always a bright student. Even though he was small in stature he was a great basketball player. He attended college at Prairie View A&M and played basketball there. He also went to school for Paralegal in Santa Ana, California and graduated with honors. He was also a licensed registered nurse where he worked diligently for a many year. He later was employed with Basis Energy until his retirement.

He later developed the skills for golf and became a great golfer. Golfing became his first hobby in lieu of basketball. He admired the sport so much that he had one of the rooms in his house set up so he could putt the balls in that particular room. Every chance he got you would find him on the golf course.

He was preceded in death by his mother Bernice Hollins, his fathers, Willie Finley and Earnest Hollins, his brothers, Charles Hollins and Argie Hollins

We are but travelers here on earth. We are not here to stay. We are going to a land that is prepared for us. Let us reach up grasp his hand. Jesus is the way the truth and the life. He will guide our steps to life eternal. Then as we enter Heavenâ€™s door, all cares and burdens are past. We shall be travelers here no more. We shall be home at last.
To order memorial trees or send flowers to the family in memory of Jimmy Lee Finley, please visit our flower store.